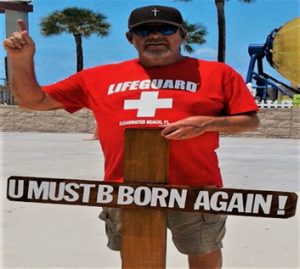 PASTOR Gene Lucas is the senior pastor of Fountain of Life Ministries.

He accepted the Lord Jesus Christ in 1973 at the age of 23. He became an ordained Pastor in 1974 at Maranatha Ministry in Las Vegas, NV.

He then moved to West Central California in Sept 1975 and became an active participant at a New Testament Bible training center.

In 1978, he attended a three-month intense missionary training program to acquire the skills needed to reach the lost for Jesus as a missionary. After graduating, Gene moved to Monterey CA to begin a house Church and to continue Street and Marketplace evangelism. Later that year, he began a 3-month missionary journey through four western states.

In 1979, Gene returned to West Central California and began a new phase of evangelism know as Christian Clown Ministry. He ministered for over 30 years as Roscoe the Rejoicing Clown. Through that Ministry, he has seen many hundreds of children, young adults and yes even adults come to know the Saving Grace of Jesus Christ.

Gene moved back to Las Vegas, NV in 1985 to continue his Clown Ministry. In 1987 was given the opportunity to entertain at a large amusement park outside of Tokyo Japan, were he shared his faith with many children and adults.

On his return to Las Vegas, He began an outreach ministry to the homeless community there along with street evangelism and planting house churches.

In 1995 Fountain of Life Ministries was established, which is still in existence to this very day. Years later FOLM partnered with an international ministry know as Point Man International Ministries, which that ministry is all about Veterans helping Veterans.

In 2009 Pastor Lucas was invited to be a guest speaker at an international conference in Jinja, Uganda. As of today, FOLM has been providing spiritual guidance and biblical teaching to help build house churches, and establish orphanages throughout that region.

One of Pastor Lucas’s passions at the beginning of His walk with Jesus was to be a Chaplain. In 2016 that was accomplished. Pastor Lucas attended a chaplain training center and received his certification. He then applied to and was accepted at two major local hospitals in the Las Vegas area.

Presently, Pastor Lucas and his beloved wife live in Clearwater, Florida. They continue their ministry with FOLM and all that it represents for these many years.